The Roman Forum is a rectangular square, surrounded by the ruins of ancient government buildings at the center of the city of Rome. It was originally a marketplace, and citizens referred to it as The Forum Magnum, or just the Forum. Located east of the Colosseum, the Roman Forum was the center of daily activities in Rome: the main site for triumphal processions (civil and military ceremonies and parades, and religious rites of ancient Rome) and elections, public speeches, criminal trials, matches between gladiators, and the center for merchants and vendors. There were also several statues and monuments to commemorate the city’s great men.

The Roman Forum and Palatine Hill

The Roman Forum is a main square located in the heart of the city, surrounded by government buildings from ancient Rome, right next to the Palatine Hill, the centremost of the seven hills were Roman nobles lived. You can walk freely between the two places, but they have separate entrances. The Roman Forum was Rome’s marketplace, the center of elections, triumphal processions and gladiatorial matches. 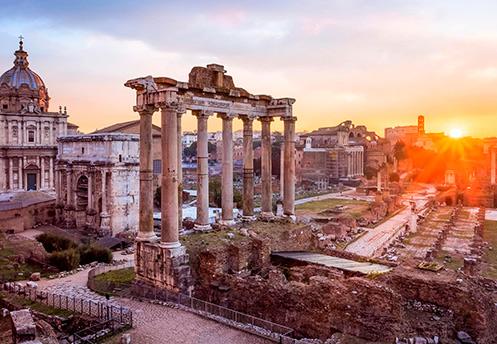 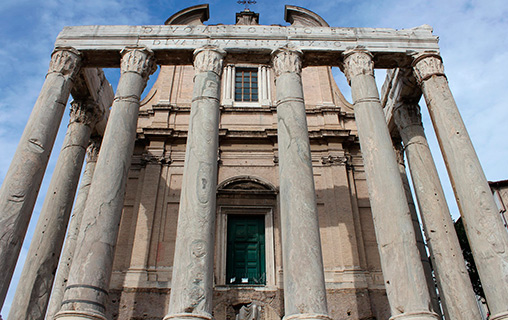 The Roman Forum buildings includes a list of existing and former monuments and built structures in the famous Roman public plaza during its 1,400 years of active use – between 8th century BC and ca 600 AD. It’s divided into three categories: ancient structures that can still be seen today as ruins or reconstructions; fragments of ancient structures or spaces where they stood; and also churchers that belong the later Christian era. 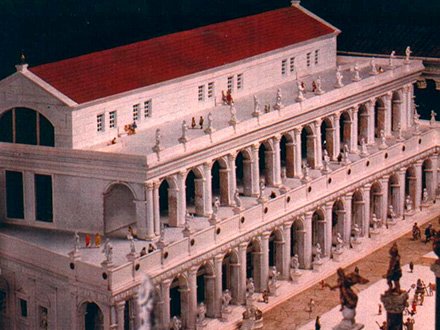 The Basilica Julia was a building structure that once stood in the Roman Forum. It was a large, ornate, public building that was used for meetings and other official business during the Roman Empire. The ruins have been excavated. What you can see today are the foundations, floors, a small back corner wall with a few arches that are part of both the original building and later Imperial reconstructions. 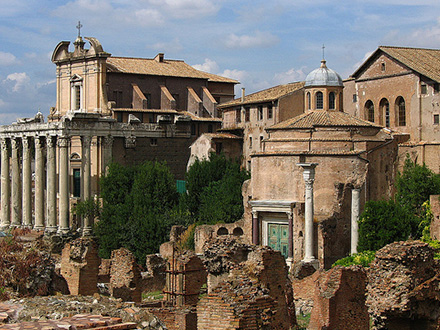 The Basilica Emilia was a civil basilica built in the Roman Forum in ancient Rome. It was 100 meters long and approximately 30 meters wide, along the sides were two orders of 16 arches, and it had three entrances for access. Today you can only see the original plans and some reconstructed elements. The Forum of Caesar

The Forum of Caesar was a public square built by Julius Caesar close to the Roman Forum in ancient Rome in 46 BC. It was originally meant as an expansion for the Roman Forum, but it transformed to sirve two additional purposes. It became a place for public business related to the Senate, in addition to a shrine for Caesar himself and as Venux Genetrix as well. 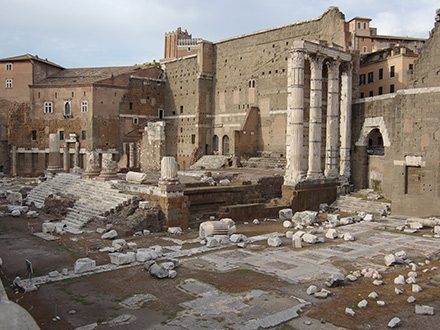 The Forum of Augusts

The Forum of Agustus – Foro di Augusto in Italian – is one of the Imperial forums of ancient Rome, built by Augustus. It also includes the Temple of Mars Ultor “greater than any in existence”. The incomplete forum and its temple were inaugurated in 2 BC. The initial plans required more space than what was available, but it was needed to provide more space for legal proceedings, since the Roman Forum was always crowded. The Forum of Nerva

The Forum of Nerva – Foro  di Nerva in Italian – is a structure built in ancient Rome, which was the next to last of the Imperial Forums built. The number four and smallest of them all. The plan of the Forum of Nerva was long and narrow with protruding columns decorating the walls. The street where it stood had already served as market area, more so for booksellers and cobblers. And the new forum served as a monumental entrance to the now larger Roman Forum. The Arch of Septimius Severus

The Arch of Septimius Severus – Arco di Settimo Severo in Italian – is a triumphal arch made of white marble and it is located at the northwest end of the Roman Forum. It was made to commemorate the Parthian victories of Emperor Septimius Severus and both his sons, Caracalla and Geta, in the two campaigns against the Parthians. 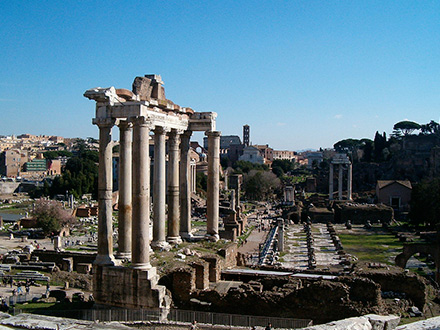 The Temple of Saturn

The view from the summit from the Eiffel Tower is worth every penny. You get a unique experience to step into wall-glassed lifts and get an ascending and spectacular view. The Temple of Romulus

The Temple of Romulus is one of the Roman Forums well preserved monument to date. It’s still intact because it was later turned into the entrance of the Church of Saints Cosma and Damiano, and is currently functioning. It is dedicated not the founder of Rome but to the son of Emperor Maxentius, who died at a very young age in the 4th century AD. 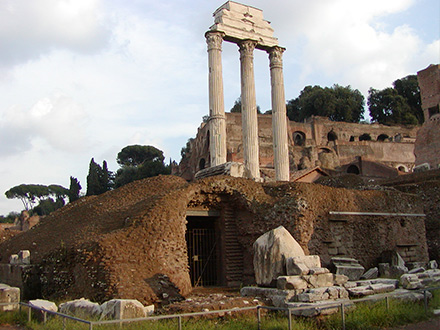 The Temple of Castor and Pollux

The Temple of Castor and Pollux is a temple built in ancient Rome in the Roman Forum. It was made as a token of gratitude for the victory obtained at the Battle of Lake Regillus in 495 BC. Castor and Pollux were the twin sons of Jupiter (Zeus) and Leda.

The Temple of Vesta

The Temple of Vesta – Tempio di Vesta in Italian – is an edifice built in ancient Rome, located in the Roman Forum, close the Regia and the House of Vestal Virgins. The temple’s most iconic feature is its circular footprint. You can still see the remains of the original structure, and they indicate that there were twenty Corinthian columns on a podium that was fifteen meters in diameter. 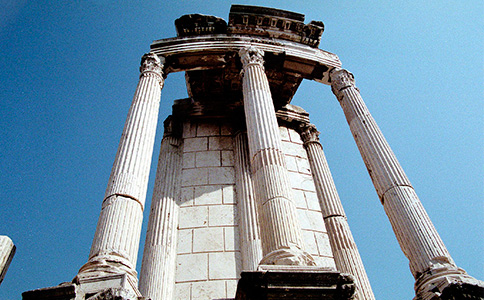 The Roman Forum at Night Tour

To explore the Roman Forum at night will take you on a magical tour through ancient Rome. It’s a 2-hour evening walk tour that will provide you with in-depth facts about the beginning of the Roman Empire. Get the opportunity to see a different side of Rome at night, explore a guided tour with an expert in more comfortable temperatures and small sized groups. Get all the details and fun facts about the Basilica Emilia, Via Sacra, Temple of Saturn, and how Romans used to live. Purchase your tickets for guided tours, available in Italian, in English and Spanish as well. 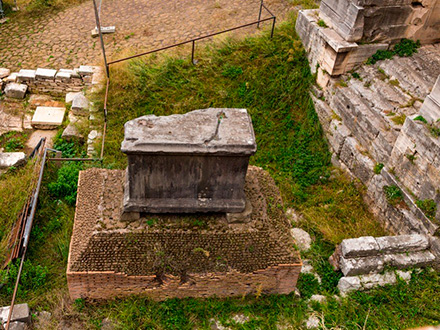 The Lapis Niger – Black Stone in Latin – is a shrine located in the Roman Forum from ancient Rome. Along with the Vulcanal they both constitute the only surviving remnants of the old Comitium, an early assembly area that was previous to the Roman Forum. The shrine may have been built by Julius Caesar during his reorganization of the Forum and Comitium Space. 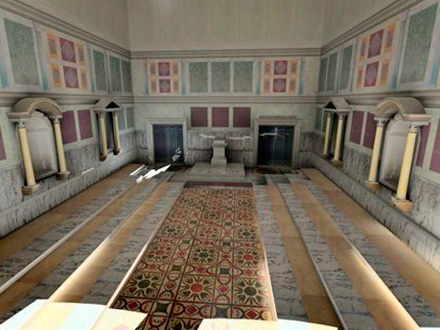 The Curia Julia in the Roman Forum was The Roman Senate House, a political institution built in ancient Rome. It was established during the first days of the city of Rome, originally founded in 753 BC, and was one of the most enduring institutions in Roman history. The ruins can be visited today. The Tabularium was the official records office in the Roman Forum in ancient Rome. It housed the offices of many city officials. It was located on the the front slope of the Capitoline Hill, under the Temple of Jupiter Optimus Maximus, to the southeast of the Arx and Tarpeian Rock.