History of the Arch of Constantine

In ancient Rome, to celebrate great victories they would build triumphal arches in public places, such as main squares, for residents and visitors to see. Most of them have disappeared over the centuries, but three of them still stand today. One of them is the great Arch of Constantine, a triumphal arch located in the heart of Rome.

The Arch of Constantine marks the celebration of an important military victory. In 312 AD Emperor Constantine I defeated Emperor Maxentius, who occupied Rome, at the Battle of Milvian Bridge. This victory for Constantine helped to consolidate his power and eventually led to the Roman Empire’s conversion to Christianity. The triumphal arch was erected and dedicated to Emperor Constantine I, as a gift from the Senate of Rome to award him.

The Arch of Constantine has a horizontal frieze below the round relief are the main parts of the time of Constantine. These historical reliefs are representations of scenes from the Italian campaign of the military victory over Maxentius, which was the main reason for the erection of the monument. The frieze begins at the western side with the departure from Milan, and continues on the southern face with the Siege of Verona on the left, an event that was of great importance to the war in Northern Italy. To the right, the Battle of Milvian Bridge is represented with Constantine’s army as victorious and the enemy drowning in the Tiber river. On the east side, Constantine and his army are entering Rome. On the north face looking towards the city are two strips with the emperor’s actions after taking possession of Rome. On the left, you can see Constantine speaking to the citizens, and to the right is the final panel with Constantine giving money to them.

The architecture of the Arch of Constantine consists of a massive rectangular free standing structure that goes over 70 feet high. It has three arches; one large central arch with two smaller arches on the sides. The monument has Corinthian columns standing with their ornate decorative tops – called capitals – that reflect an architecture style developed in ancient Greece. The arch is decorated with carved sculptures and was built in a shot time period, where the builders reused parts of other structures and monuments. 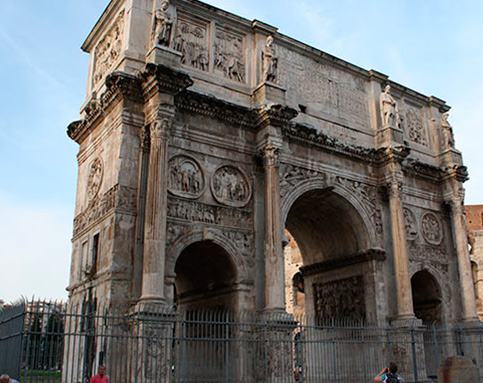 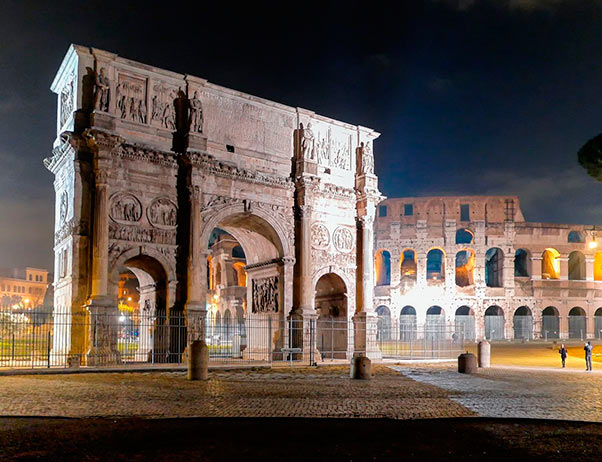 The Arch of Constantine stands about 20 meters high, 25 meters wide, and 7 meters in depth. It has three portals that punctuate the exceptional width of the arch, each one flanked by partially engaged Corinthian columns. The central opening is approximately 12 meters high, which has above two identical inscribed marble panels – one on each side – that read: “To the Emperor Caesar Flavius Constantinus, the Greatest, pious, fortunate, the Senate and people of Rome, by inspiration of divinity and his own great mind with his righteous arms on both the tyrant and his faction in one instant in rightful battle he avenged the republic, dedicated this arch as a memorial to his military victory.”

The Meta Sudans, Latin for “sweating turning post”, was a large monumental conical fountain in ancient Rome. It was built between the Colosseum and the Temple of Venus and Roma, close to the later Arch of Constantine, at the main juncture of four regions of ancient Rome. The Meta Sudans were constructed between 89 and 96 AD, under the Flavian emperors, a few years after the completion of the Colosseum. It functions as a turning point, and marked the spot where a Roman triumphal procession would turn felt from the via Triumphalis along the east side of the Palatine Hill and onto the via Sacra, into the Roman Forum. The Meta Sudans is made from brick and concrete core, faced with marble. And you can still see the foundation visible from the circular region in front of the Arch of Constantine. 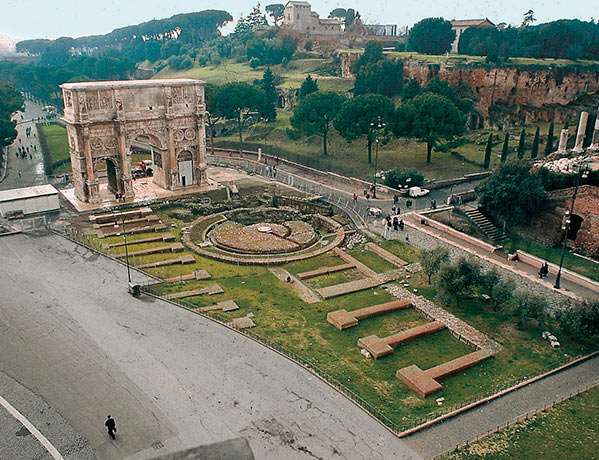 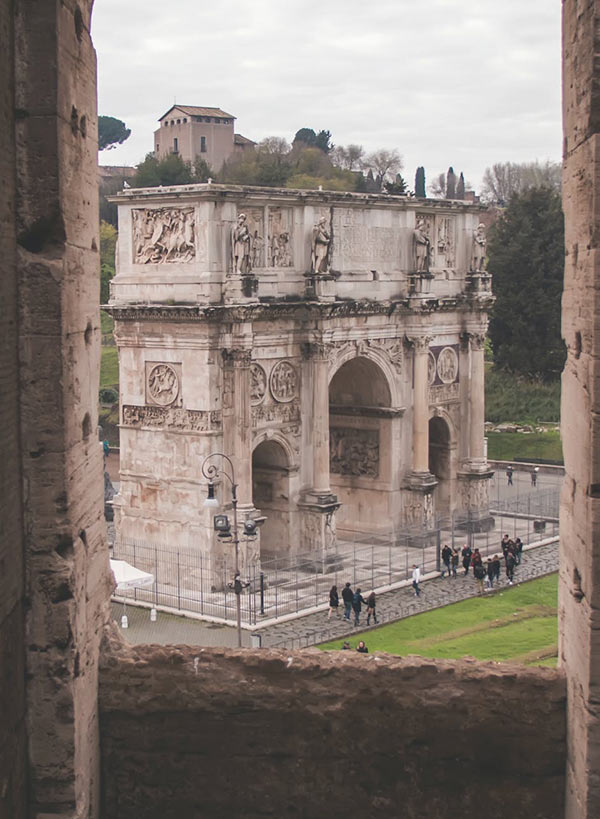